I’ve been very M.I.A. recently as I am once again with my long-distance one and only :). I flew to England and the next day we flew to Italy for a 4-day vacation together. This was the first time we actually got to fly together! It was nice being able to sleep on the person beside me. 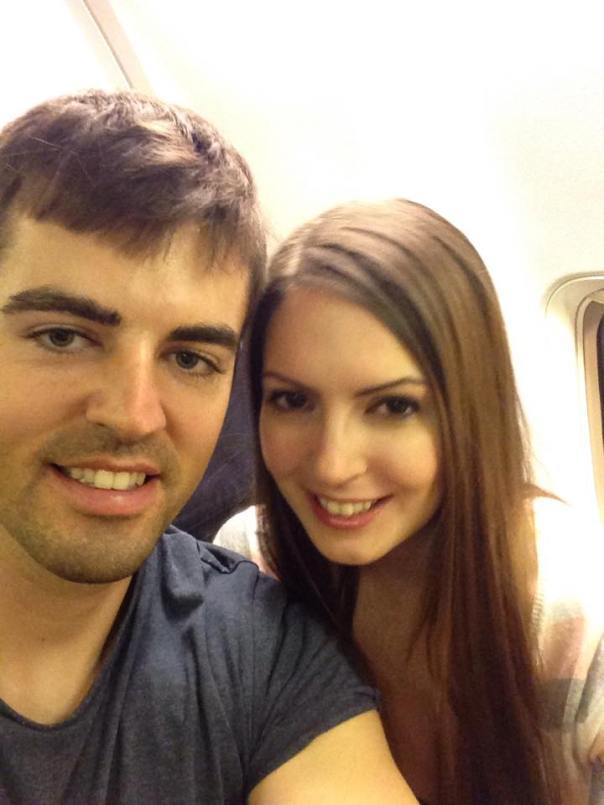 We stayed at Hotel Traiano which was perfectly located in the heart of Rome and in the very middle of all the sights. We were within walking distance to everything (I can’t believe how small Rome actually is!).

Our hotel was a 30 second walk from my favourite Rome monument: The Monumento Nazionale. 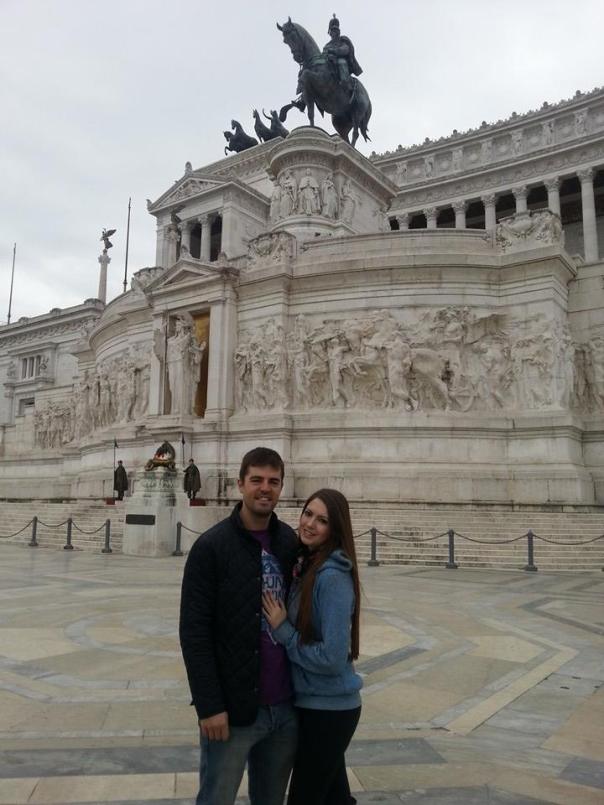 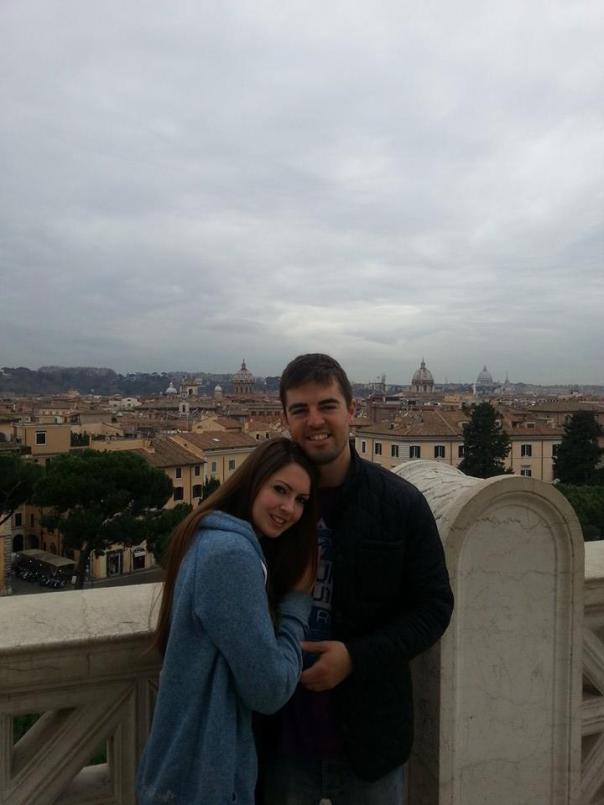 Our first evening we ate at La Proscuitteria (I heard about it on tripadvisor). It was a very teeny little place, but a great first experience in Rome. Afterwards we strolled down the majestic, lit-up streets and found another little place I’d looked up on tripadvisor: San Crispino Gelateria. Their gelato is incredibly authentic: you’d think you were biting into the very fruit on the label. Also their lemon sherbet tastes just like homemade lemonade. 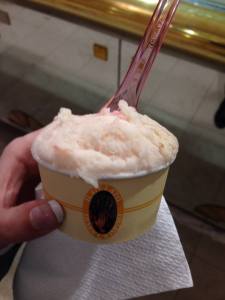 The next day we met up at the Campo Dei Fiori with my Italian uncle who happened to be visiting Rome at the same time and his nephew. They took us by all the most beautiful piazzas, the Pantheon, and then into Trastevere (just across the river) for some of the best food I’ve ever eaten at a place called Grazia & Graziella. Below is us at Piazza Navona. 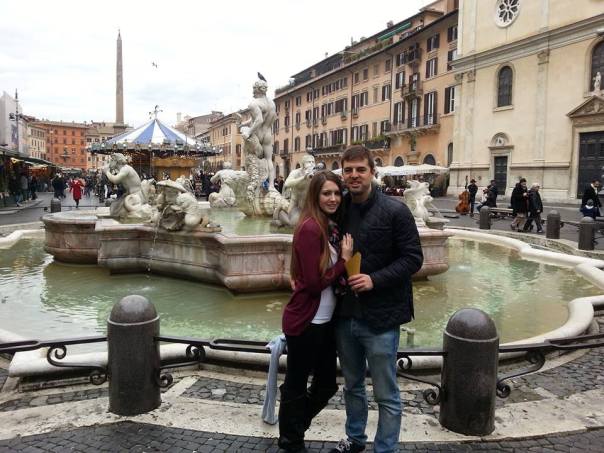 The food and service at Grazia & Graziella was amazing. From the wine to the scrumptious caprese salad to the fries which were impeccably spiced and paired with feta cheese; probably the best fries I’ve ever tasted. They gave poutine a run for it’s money. We spent the rest of the day wandering around Rome, napping, then wandering again.

Gelateria Valentino had mango gelato to die for. So yummy! Then as we wandered we happened upon the colloseum (we thought it was much farther away!). It was another magical night in the romantic city. 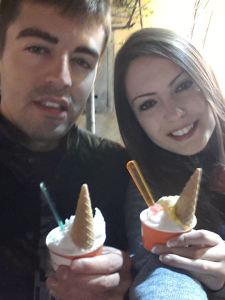 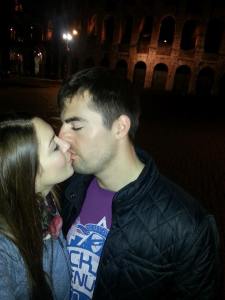 That night we stayed up late watching “Who Do You Think You Are” on Josh’s phone as all the television is in Italian (even Big Bang Theory and The Simpsons… it was weird!). The next day we wandered through the monumento nazionale before heading to the colloseum where it poured rain and we got utterly soaked. Although I’ve always wanted to see the inside of the famous Colloseum, I found myself feeling very upset knowing some of the disturbing history of the building; all I could think about were the victims of the horrible atrocities that took place there so we didn’t stay long.

The remains of the Roman Forum as viewed from the National Monument; Colloseum in the background. 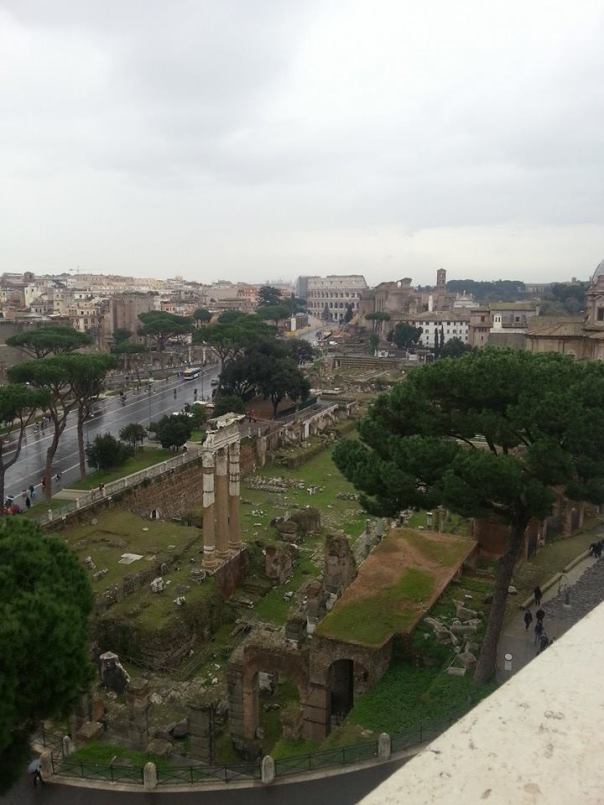 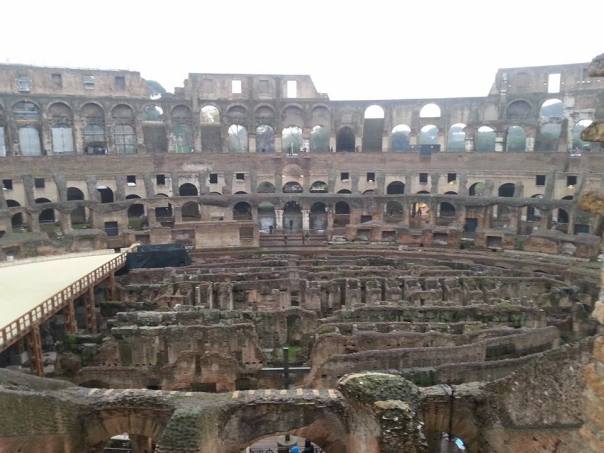 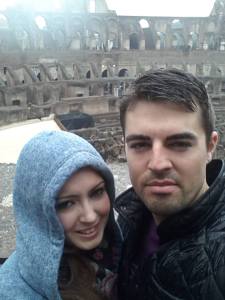 After the Colloseum we stopped at site of the Circus Maximus. A seemingly insignificant dirt track is all that is left of the largest stadium ever built. At one time it held 30,000 people and was used for charriot racing. And after this we ducked into a little Irish pub for some tea to warm up. 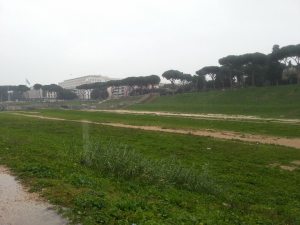 That evening we dined at “That’s Amore!” and though a little pricey I thought the food was quite good. Although I was a little confused about my bruschetta… some assembly required! 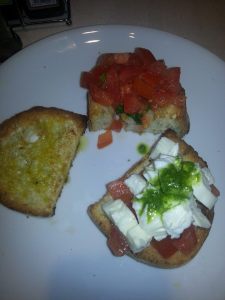 The next morning I tried (and failed) to talk Josh into having a lazy day as they were calling for rain all day. Luckily the rain held off and we walked first to Pizzarium (a little off the beaten path but worth it. It was chock full of real, live Italians and the pizza was delicious) and then to the Vatican. It was a long walk as we accidentally took the scenic route but it was one of those things we can at least, if nothing else, say we saw in Italy. Plus it’s the smallest country in the world so that’s kinda cool. On a couple occasions we also tried “suppli” (breaded rice and cheese or rice and various things). 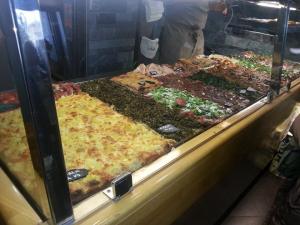 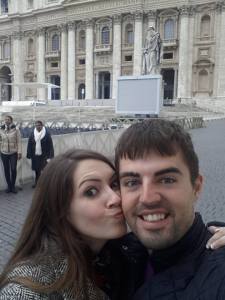 Our last meal in Rome ended up being at Burger King as my feet and legs were so sore from all the walking we had to dine near the hotel. Also after finding out a cab was our only option to the airport at 3am we were kinda broke! It was a lovely trip with a boy that makes me incredibly happy everyday. I honestly think I am the luckiest girl in the world, and I’m honoured to have someone so special to share my adventures with.

Been to Italy? Where have you had the best Italian food (in or out of Italy)?