I’m a Canadian girl, and one day on a whim I messaged a very cute British boy on a dating site thinking nothing would come of it. To my surprise we quickly fell head over heels for each-other. On that first night we messaged each-other he stayed up the better part of the night and only got in an hour or two of sleep before beginning work at six am the next day (I hadn’t realized the time difference!). On our second Skype chat he said he would fly here to see me; very unused to that sort of commitment I thought he was kidding. A week in he drunkenly professed his love for me via Skype. I thought he may be a tad crazy, but as we talked each and everyday I realized he was just crazy about me, and that I felt the same.

I wrote him a song, and clumsily strummed my guitar to it on Youtube. He said he thought it was amazing, that he couldn’t believe someone would write a song for him. He told me out of the blue often that I was beautiful. That he loved my brown eyes (that I didn’t like). He appreciated all of my little surprises. He was amazed by me in a way that I’d always wished someone would be, and I was amazed by him too. By his kindness, by his electrifying smile, by his humbleness, by those gorgeous green eyes, by his perfect nose (that he didn’t like), by the way he made each of my days so much better.

We found ourselves talking about each-other constantly, eager to show anyone short of a stranger a photo of the person who had come into our world and turned it upside-down. He played my music for family, he told people about the novels I had written. I told people of his job in the army, his travels, and how sweet he was to me. He was proud of me, supportive, loving, he was on my side. It finally made sense how a relationship was supposed to be. There were no games with him, no waiting by the phone, no hiding my feelings or having to play it cool, no having the rug ripped from beneath me… just honest, constant love. Something I had never known.

One day while Skyping him at his army base he told me, while laying on his cot in a room full of soldiers how he couldn’t wait to lay beside me and look into my eyes. Of course the “lads” began to tease him, and he replied “What? That’s how you talk to someone you’re crazy about!” It was perfect, and still makes me smile. There was no hiding our feelings for each-other. Though when I told him he was lookin handsome in front of his family and friends over Skype he did turn the colour of a tamah-oh (that’s how he says tomato in his British accent… he always gets a kick out of when I try to imitate it).

We talked for three months about the first time that we would finally lay eyes on each-other at the airport. How I’d be there waiting, searching strangers faces until my gaze met those handsome green eyes, and how I would run and jump into his arms. Or perhaps, how we would coyly make our way to each-other and embrace in one of those awkward ass-out hugs before walking to the car hand-in-hand on a beautiful Florida afternoon. Of course, it didn’t happen at all like we’d imagined.

In reality my plane was delayed an hour and it turns out the drive from my airport to his was two hours, not the forty-five minutes I had thought. Additionally, a torrential downpour rolled in and at times I couldn’t even see the hood of my car on the highway. I had made two wonderful new friends on my flight over; a girl about my age named Tamara who turned out to be an actress on one of my favorite shows, and her mother Maria. Like me they were headed to Tampa, and instead of renting a car I offered to give them a lift. They told me they didn’t want to intrude on our romantic moment but also admitted they were curious to see what would happen :p. I stopped quickly by my dad’s vacation house where we’d be staying and changed into the outfit I’d long had planned. I wore my hair down and straight, high-waisted white shorts, a blue lace top and matching heels, plus the bluebird earrings he’d sent me for my birthday.

By the time I finally arrived at the Tampa airport my sweetheart had been waiting there for 3 hours (he had left his house for the journey from England to Florida 23 hours earlier!). He must have been exhausted but he didn’t look it. I crept along the departures lane ready to catch a glance of the boy I’d waited months to see hoping he hadn’t caught a flight right back to England after waiting there so long for me. Near the end of the lane way there he was… tall, in a white dress shirt and dark wash jeans with suitcase in hand looking all sorts of handsome. He pulled his luggage around back and I popped the trunk (slash boot). He plunked his suitcase in as I apologized for the delay. We had time for a quick embrace and a peck on the lips before we were hurried on our way. Not quite the Oscar winning embrace we’d imagined! Tamara traded him the shotgun seat as I began introducing everyone and explaining everything. We held hands, sneaking glances at each-other. He was even more gorgeous in 3D than I’d imagined, and he later told me he thought the same thing when he’d first laid eyes on me. It felt surreal, as we sat in Maria’s livingroom side-by-side having a drink with our new friends. It was finally happening. After 3 months of bad internet connections, dropped calls, technical and time difference difficulties, we were finally together, and it was so wonderful.

We spent two amazing weeks together. We did Universal Studios. Toured the Everglades. Held an alligator. Swam in the ocean. Took a road trip to Miami. Ate cookie dough ice cream in the rain. Made heart-shaped foods. Watched movies. Did the Edison and Ford Museum. Did karaoke. Visited friends. Cuddled. Rode in a limo. Went out for dinner. Stayed in for dinner. Did a photo shoot. Played pool. Sat at a restaurant over the water and watched a beautiful lightening storm in the distance. When he carried me over the puddles at Fort Myers beach a man behind us joked “you’re making the rest of us look bad!”

My sweetie told me on his way over he flew over “Nova Scotchya” (instead of Nova Scotia) which made me giggle. In his defense I pronounced his hometown wrong for quite a while. I also found it funny that he was amazed by Wal-Mart and was always wanting to go there. He thought it was funny when I’d say things like “cologne” or “house coat.” I found it hilarious when he’d say “that’s bollocks” or “I’m knackered” (pronounced knackaahd). When I dropped him at the airport I handed him a love letter that said I had hidden some beef jerky in his carry-on luggage, and when I got home from dropping him at the airport I found a note under my pillow that said “I miss you.” Turns out we’d both hidden a little surprise on each-other 😉

We are always making each-other laugh with our language differences (don’t get us started on how to say Barbados). And now I am saving my pennies for a flight to England and I am officially his “bird” (girlfriend). That first meeting might not have happened quite the way we’d pictured, but it didn’t matter. It was perfect, cause we were together. Can’t wait until we are together again ❤ 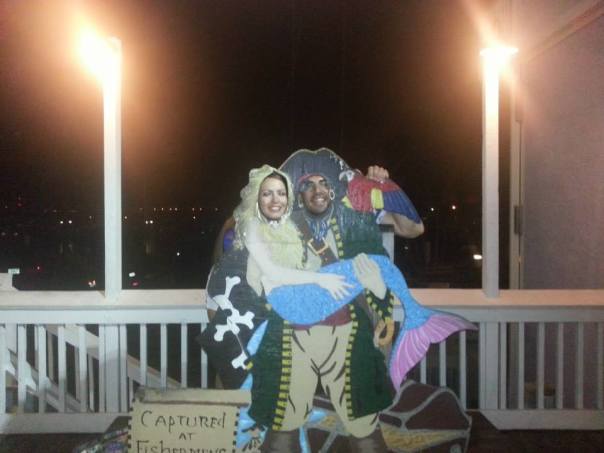 Me and my honey at his favourite store, Wal-Mart! 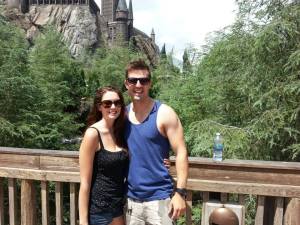 Hogwarts in the background (at Universal Studios!)

Stopped for a drink in Miami 🙂

Universal again… the Jurassic Park ride was our favourite. So good!

4th of July at Siesta Key in Sarasota 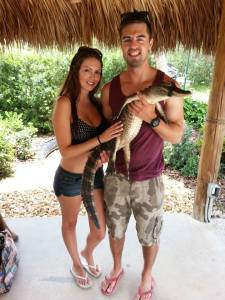 Our last photo together on the trip, at the airport. Not gonna lie

got a little teary after he went through the gates. I’ll be seeing you

Heres the song I wrote him called “He Wears Combats, She Wears Cowboy Boots”: